This essay was originally written in March 2019 during the "Botanical Matters" exhibit at the University of Arizona Museum of Art.

When the late Katharine Hepburn suggested to Barbara Walters in a 1981 interview that she might like to be thought of as a tree, Walters asked Hepburn what type of tree she might be. Hepburn responded, chuckling at the path down which her own words had led:

"I hope I'm not an elm with Dutch Elm Disease. I don't know, because then I'm withering! Oh, I would like, everybody would like to be an oak tree. That's very strong, very pretty."

The strength and beauty of oak are also evoked in Alan Sonfist's "Gene Bank," currently on display as part of "Botanical Relations" at the University of Arizona Museum of Art. "Gene Bank" is comprised of a 6x6 grid of photographs, below which a wooden box/shelf is mounted. On the shelf are 26 glass jars filled with twigs, oak leaves, and acorns, and each capped with muslin and a small paper tag. The photographs above show a stand of trees, presumably viewed from a nearby clearing. While Hepburn imagined oak life as singular and dignified, "Gene Bank" shows life in the Quercus genus to be disjointed yet communal. 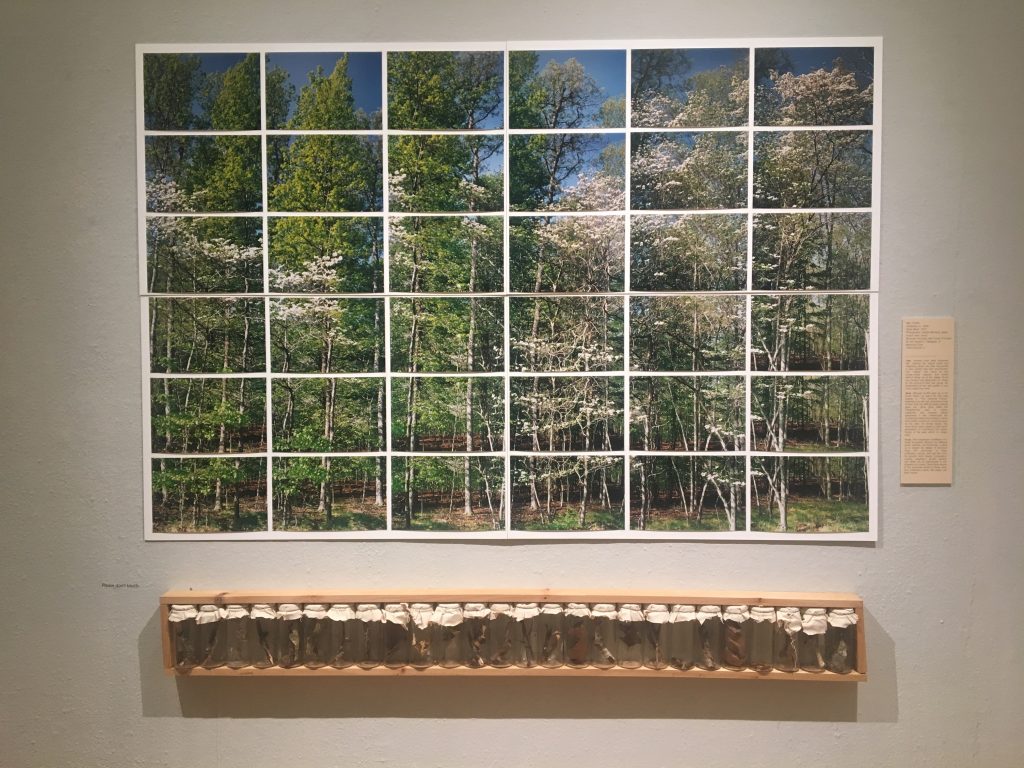 To look at Sonfist's piece, you must crane your neck up towards the canopy and then draw it back down to the jars, as though you were studying a tree from its smallest top leaves to its root flare. Upon closer inspection, it becomes apparent that each photograph contains a little bit of the one above it and below it. Along the vertical axis, the photos are almost the sort one expects for a composite image - each contains a little more than it must and shares its identity with the others. The opposite problem emerges along the horizontal axis. Looking left to right, the images fail to match up: branches go missing and bright green foliage forms a hard line against blue sky. In trying to scan the images, a feeling of stuttering or stammering emerges and - for me at least - aggravates the eyes, prompting slower study. Plants and photographs are kin in their indeterminacy and repetition. 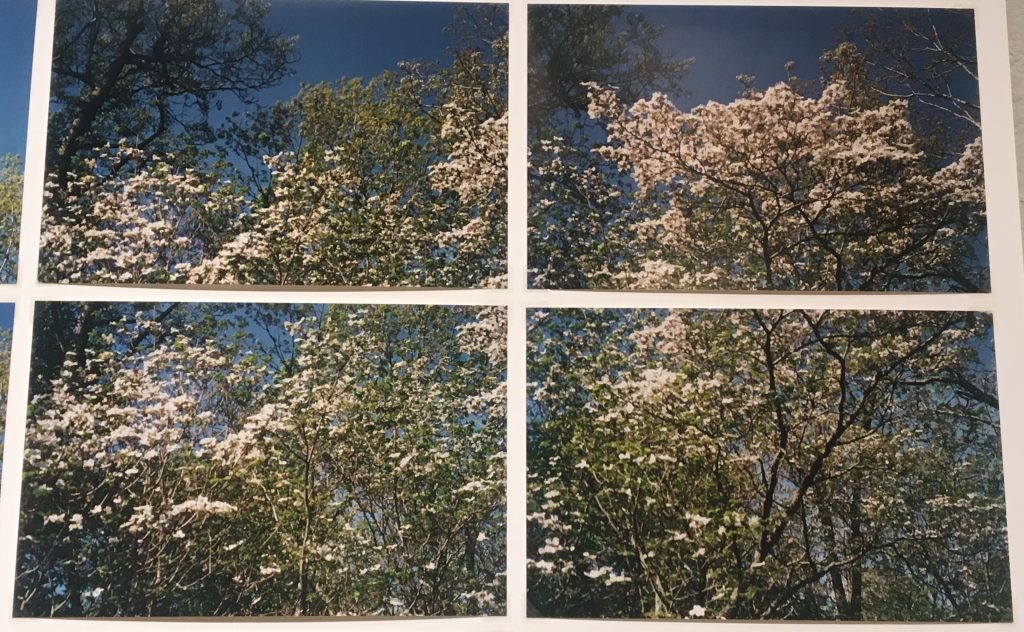 Bending my neck down, I look at the plant matter which has 'accumulated' below the prints. I am reminded of gravity pulling dead leaves and broken tree limbs towards the soil. Could these be coffins, or scopes into the dirt? I begin to look upward again and the stuttering images take on the rhythm of climbing through the branches - and then falling back through them - with a constant stop/start movement. Between the photos and jars is a blank middle space. Michael Marder associates plants with middle space, with being between and in contact with other beings - yet without being 'the center.' The middle is where decaying matter becomes nutrient, and where sunlight becomes resource for mycorrhizae and soil organisms. Never attracting the eye, but never inactive in the visual field, this middle space is almost critical to the work.

Naming the piece "Gene Bank," Sonfist clearly evokes herbaria, seed banks, germplasm stocks, and other caches designed to "help future generations reconstruct" an idea of nature. Since the 19th century, gene banks (and their pre-genetic science predecessors) have often aimed to collect almost-extinct wildness and hold it in reserve for the day when civilization gets its comeuppance and requires an infusion of authenticity. Rather than valuing lifeforms in the present, gene banks build up an abstract, precarious, potential value for a person, plant, fungus, microbe. Practices of collection and retention are created in response to imagined precarity. In other words, relations in a gene bank are between a creature which must be in peril to be of valuable and a second creature who acquires the first in a doomed attempt to forestall its own peril. Such was the logic of the Human Genome Diversity Project which collected biological samples from indigenous peoples throughout the mid-20th century. HGDP researchers - functioning under what Kim TallBear calls the 'vanishing indigene' myth - presumed that indigenous peoples were almost extinct, and would not survive into the future, but could provide genetic resources for non-indigenous future generations. Thus, the HGDP worked not only to create a good future for some, but actively refused the possibility of a future for others all while turning those others into a bankable resource. When thinking of gene banks, it is good to ask: Whose future is saved here? Whose death is promised? 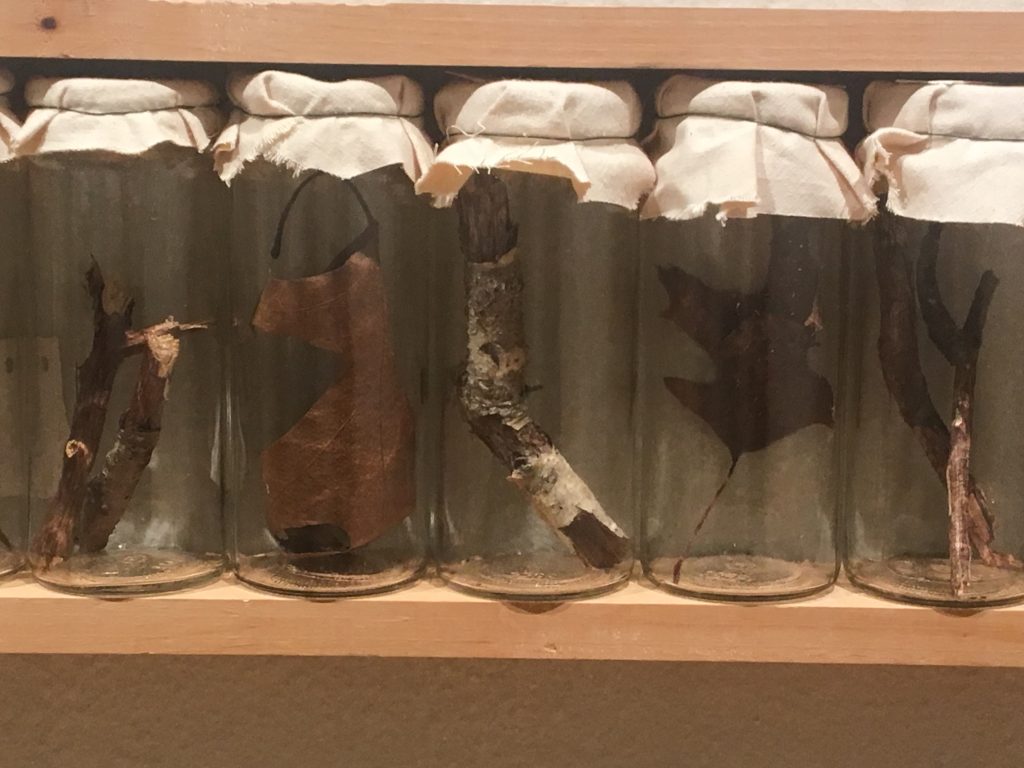 Sonfist's piece is not entirely divorced from this logic of precarity, but it is noticeably different from gene banks of the typical sort. As I look at the plant matter in the jars, I see acorn tops - a hint to seeds without the lifeforms themselves. I see crumbling leaves and sticks which look like they might be colonized by fungus or other micro-life. The tags on the jars are tucked away so you cannot read them. This does not seem like the plant matter or information one might need for saving a species. Loose muslin coverings on the jars lead me to wonder what this room might smell or sound like if the leaves and branches were scattered on the floor. Meanwhile, the photographs above the jars would never suffice for studying the detailed plant structures over which botanists obsess. But the photos are perfect for imagining standing in the clearing and taking in the view. "Gene Bank" brings forward thoughts of experiencing a forest more than a desire to catalog and keep its biological data. Perhaps the genes to which Sonfist alludes are a metaphor for repeated aesthetic motifs of the forest, or the repetitive movement of animal bodies as we look and move up and down through the trees. While Sonfist hopes gene banks can reconstruct the forests in the literal sense of saving species, his artwork points to a need to remember the impressions the forest makes on us. 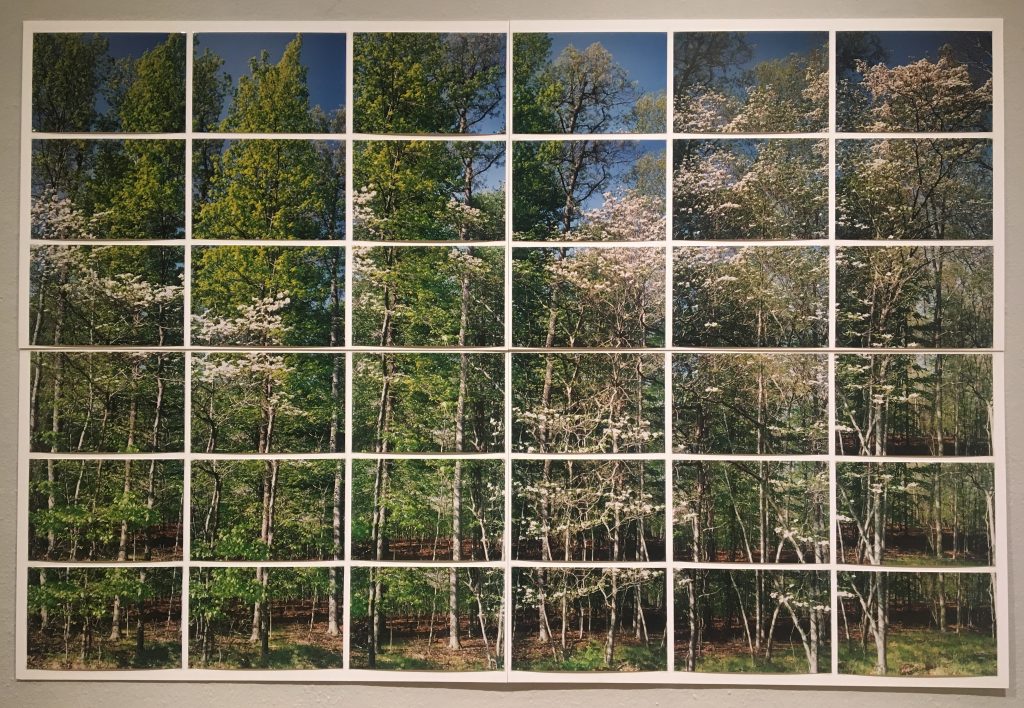 The phrase "gene bank" - in contemporary Englishes - pulls on the ubiquitous meaning of 'bank' as a place where funds are stored and managed. Another meaning we might look to is found in the term "snow bank" - a contingent amassing of snow, brought together by wind or mechanical forces. A bank is an impediment to movement or at times a shelter. In "Botanical Relations," "Gene Bank" stops the viewer and pushes them into a visual heap of plant matters to be considered.